Trump Administration Increases Pressure on Huawei with New Export Controls That Will Limit Its Access to Semiconductors Produced with U.S. Software and Technology

On May 15, 2020, the United States Department of Commerce, Bureau of Industry and Security (“BIS”) announced a new rule to further restrict Huawei’s access to U.S. technology. The rule amends the “Direct Product Rule” and the BIS Entity List to restrict Huawei’s ability to share its semiconductor designs or rely on foreign foundries to manufacture semiconductors using U.S. software and technology.

In 2019, BIS designated Huawei and 114 of its affiliates to the Entity List, which effectively cut off Huawei’s access to exports of U.S.-origin products and technology. BIS has claimed that Huawei has responded to the designations by moving more of its supply chain outside the United States. Huawei and many of the foreign chip manufacturers that Huawei uses, however, still depend on U.S. equipment, software, and technology to design and produce Huawei chipsets.

The rule announced last week has been long anticipated both in the U.S. and China, and comes after a period of interagency back-and-forth regarding the precise scope of the rule. In response to the news of a pending change, Chinese antitrust regulators warned U.S. semiconductor companies last month to expect unspecified retaliation by China if the rule went into effect. In response to last week’s announcement, the Chinese Ministry of Commerce said it will take all necessary measures to safeguard Chinese firms’ rights and interests. Reports in the Chinese media have suggested the Chinese government will put U.S. companies on an Unreliable Entity List, but exactly what Chinese response there will be is not yet clear.

BIS’s action expands one of the bases on which the U.S. can claim jurisdiction over items produced outside of the United States. Generally, under the Export Administration Regulations (EAR), the U.S. claims jurisdiction over items that (1) are U.S. origin; (2) foreign-made items that are being exported from the U.S., (3) foreign-made items that incorporate more than a minimal amount of controlled U.S.-origin content, and (4) foreign-made “direct products” of certain controlled U.S.-origin software and technology. Under the fourth basis of jurisdiction, also known as the Direct Product Rule, foreign-made items are subject to EAR controls if they are the direct product of certain U.S.-origin technology or software or are the direct product of a plant or major component of a plant located outside the U.S., where the plant or major component of a plant itself is a direct product of certain U.S.-origin software and technology. Items that are subject to EAR controls may require BIS licensing depending on the export classification of the item and its destination, the end use to which the item is being put, and the end user receiving it. Depending on the licensing policy BIS applies to particular exports, BIS can effect an embargo on the export of items subject to the EAR to particular countries, end uses, and end users.

BIS’s new rule allows for the application of a tailored version of the Direct Product Rule to parties identified on its Entity List, with a bespoke list of controlled software and technology commonly used by foreign manufacturers to design and manufacture telecommunications and other kinds of integrated circuits for Huawei. The rule imposes a control on foreign-produced items that are a direct product of an expanded subset of specific technology or software described by certain specified Export Control Classification Numbers (“ECCNs”) and foreign-produced items that are the direct product of a plant or major component of a plant located outside the U.S. where the plant or major component is a direct product of the same expanded subset of U.S.-origin technology or software.

Specifically, the rule will make the following non-U.S.-origin items subject to the restrictions of U.S. export controls:

Combined with Huawei’s Entity List designation, this new rule will significantly restrict Huawei’s ability to export its semiconductor designs as well as to receive semiconductors from its foreign manufacturers. It will also curtail the ability of Huawei to receive semiconductors from the non-U.S. subsidiaries of U.S. companies that may have previously been eligible for export to Huawei without a license because they were produced from software and technology that would not have triggered export licensing through the normal operation of the Direct Product Rule. Taken together, these changes mean that BIS can now block the sale of many semiconductors manufactured by a number of non-U.S.-based manufacturers that Huawei uses across its telecom equipment and smartphone business lines. (See the chart below for a description of the Huawei-related transactions now subject to BIS review.) 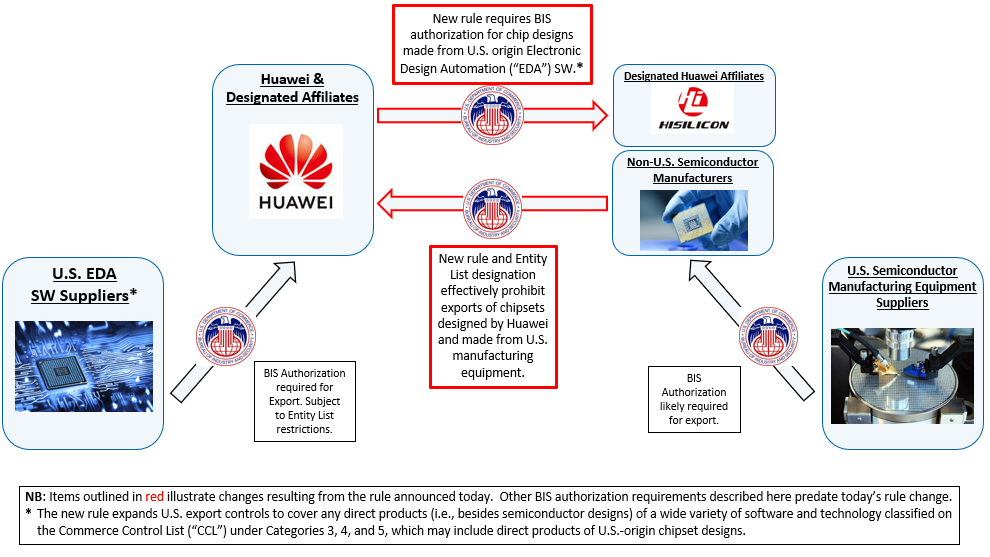 The new rule grandfathers certain semiconductor production already occurring. Where production had already begun by May 15, 2020 on foreign-produced items based on Huawei design specifications in foreign factories utilizing U.S. semiconductor manufacturing equipment, these product will not be subject to the new licensing requirements if they are exported, reexported, or transferred by 120 days from the effective date.

[1]   Interestingly, the new rule appears to restrict only the transfer of these items between Huawei entities. This appears to be inconsistent with the description of the restriction offered in the interim final rule and the Department of Commerce press release announcing the change, both of which suggest that the restriction is broader—limiting the provision of covered items to any person. The broader formulation of the rule would effectively prohibit Huawei from providing its semiconductor designs to any foundries—not just those that it owns, such as HiSilicon.

Gibson Dunn’s lawyers are available to assist in addressing any questions you may have regarding the above developments.  Please contact the Gibson Dunn lawyer with whom you usually work, the authors, or any of the following leaders and members of the firm’s International Trade practice group: